The Great Stupa of Dharmakaya was built in honor of the great meditation master, author and artist, Chögyam Trungpa Rinpoche shortly after his death. The finest and most enduring materials have been used throughout the structure, which was constructed using concrete that was formulated to last 1,000 years.

The shape of the Stupa represents the Buddha, crowned and seated in the meditation posture on a throne. His crown is the top spire; his head is the square at the spire’s base; his body is the vase shape; his legs are the four steps of the lower terrace; and the base is his throne.

A 48-foot square base with gates, stairways and openings on all four sides form the lower level. Inside is an assembly hall 33 feet square and 24 feet high. In its center is a large, golden statue of the Buddha sculpted in the Gandharan style.

Most stupas are sealed monuments. A most unusual aspect of The Great Stupa of Dharmakaya is that the hall on the first level is open to the public.

The third vase-shaped level of the Stupa houses a round chamber 19 feet in diameter and 16 feet high containing a statue of Vajrasattva. This chamber contains a three-dimensional Chakrasamvara mandala, as well as statues, paintings and frescoes throughout.

On top of this level is the spire, which consists of 13 disks representing stages of enlightenment that narrow at the top, crowned by a golden moon, sun and jewel.

A terraced park, nearly 200 feet in diameter and adorned by green lawns, trees, gardens and walkways, surrounds the Stupa.

The Stupa of Dharmakaya is called a Lha Bab choten; it specifically commemorates the Buddha’s descent from Tushita heaven where he taught his mother. The steep stairway just below the big portal opening (gau) high up in the round vase chamber (bumpa) symbolizes this descent.

At the top of the stairway in the portal is a large sculpture of a standing Buddha. This is a unique feature of the Great Stupa not found elsewhere. It symbolizes Trungpa Rinpoche’s distinct ambulatory style of teaching in the West.

“The Great Stupa of Dharmakaya Which Liberates Upon Seeing” is the name given to the stupa by H.H. Dilgo Khyentse Rinpoche. The stupa interior features extensive artwork, design and statuary styled to reflect Trungpa Rinpoche’s lineage, as well as his interest in Japanese aesthetics and his teachings on the ancient Shambhala kingdom.

The Great Stupa holds the entire skull relic of Trungpa Rinpoche. It is placed in the heart center of the 20-foot-high golden Buddha seated on the ground floor. In this manner, the Great Stupa retains its earliest symbolic function: a chamber or motherly womb that can transform the seeds of the past into the life forms of the future. 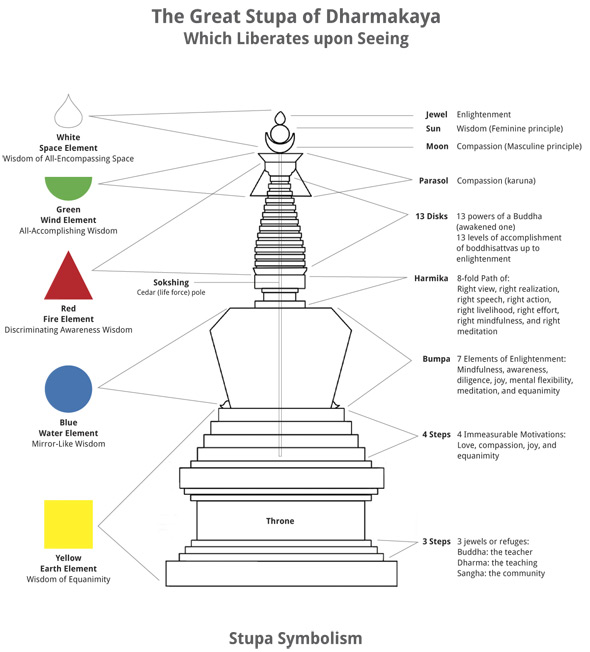