Big old family visit — blood family, mixing with land family.  A whole week of eventfulness, with gaps.  Such eventfulness these days.  So many gaps I refuse, deny, ignore.

This is Jake.  He barks at me ferociously every chance he gets.  He and his family live in the walls. 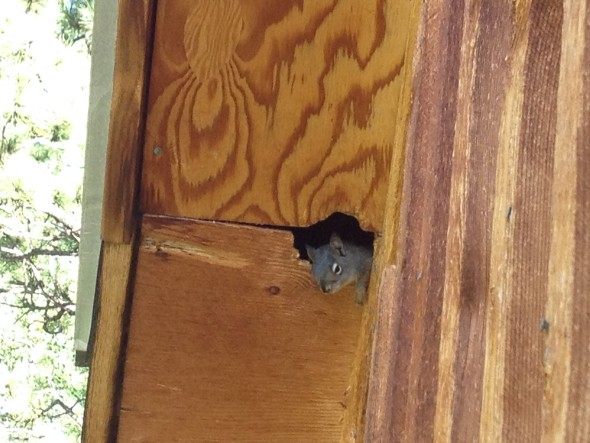 Life here in the cabin: peeing in a cup, carrying water jug up the long hill in the shiny new car — some weird American version of life: undeveloped in ways — such as no toilet, no sink (in the house) and yet, shiny new car.  Not carrying jug on my head, not even lugging it up in the back of a junky pick-up.  Drinking fine tea in the morning, imported from Taiwan.  Here on the computer, typing, looking out at the timeless mountainside.  Pardon me, time to pee in my cup and dump it out the window.

Heather pees in a bucket.  She hasn’t peed one single time yet today.  I’ve probably peed about seven times since waking two and a half hours ago.  Doing my best to fit in the rest of my desired life events: practice, tea, writing, brushing my teeth.  It becomes, perhaps, a bit more difficult without toilet and sink — because then all normal little life things take longer.  We collect dishes in a bin, then I truck them down the hill once a week, wash them in the machine, and then bring them back up.  I fill the water jugs a couple of times a week.  I won’t go into details about the poop situation.

Now, I have to cart Heather over to the shower.  This will be her first one in nine days.  Heather is injured — sprained ankle.  So, all things a bit more-more difficult.  Maybe I’ll tell that story later, and more about the gimp-adventure.  Now, time for her to crawl down the stairs.  I’ll meet her at the bottom and toast a bagel for her, then she’ll crawl down some mroe stairs and I’ll meet her at the bottom with her crutches.  Then, she’ll hobble over to the car and I’ll deliver her to the bathhouse down the road.  She’ll hobble over to the women’s side, hobble inside over to the shower, and 45 minutes later I’ll pick her up, drop her back off at the house, and cruise down the hill to work.  I might have time for a shower today also.

Travis Newbill is a writer, musician, and aspirant on the path of meditation.  He currently resides at Shambhala Mountain Center, where he serves in the roles of Marketing Associate and Shambhala Guide — a preliminary teaching position.  Follow Travis on twitter: @travisnewbill